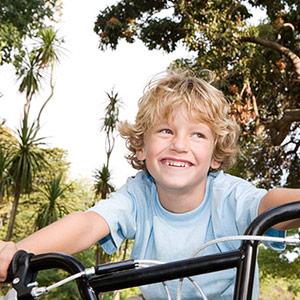 My teens and I went to Walmart to get some sleds. After picking out the coolest sleds we could find, we rounded the corner, and something made me stop.  It was a blue Tony Hawk stunt bike – classic, only $49 bucks, and the perfect size for my 9 year old nephew.

I called my sister. “Tami, I know we don’t do gifts for the kids, but there’s this bike.  I don’t know why, but I’m supposed to buy it.”

Tami said, “Well... Ryly’s bike was stolen out of the shed last week, and we don’t have the money to get him a new one.”

Hanging up the phone, I said, “Okay, kids, we’re getting that bike for Ryly.  He won't care that it’s the cheapest bike in Walmart.”

We took our treasure to the checkout counter, when it rang up at $124, I nearly choked. I said, “Can you double-check that price?”

A line began to form behind me; impatient shoppers gave me the stink-eye. The checkout clerk called the supervisor, and together they discovered the $49.99 tag had been taken from some other item. Twenty minutes later, when the Supervisor rang for the Assistant Manager, I started to get scared.

My thoughts were interrupted when the Supervisor said, “What are we going to do?”
The Assistant Manager said, “We’re going to give them the bike for $49.99.”

And that’s how, my children learned the power of giving. I wish you could’ve seen my nephew riding his Tony Hawk stunt bike: no shoes, no jacket, all smiles.

The Kids on the Bus Told Me... 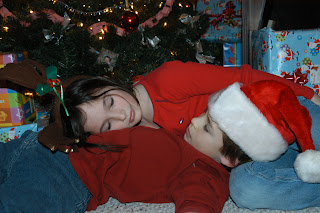 Do you have a scrooge dragging down your holiday spirit? Or do you wish it was Halloween, so you could put on the witch costume? Are the radio stations, cranking out their Christmas tunes, making you feel like running your car into a tree? Or maybe buying DVDs, iPods and Kindles has you longing for simpler times, when parents gave gifts like sleds and bikes.

If so, maybe this story will bring you back to a trouble-free time in your life – a time when school was fun and spinach was disgusting. Think back to when your only worry was wondering if Santa got that letter you mailed him, and if he’d overlook that ball you chucked through the neighbor’s window. Remember? Remember waiting in line for your turn to tell the big guy that special gift you’d been wanting…since almost last Christmas, even?

My sister Randi was talking to her her eight year old son, Dean, and it went something like this:

Dean: “Mom, the kids on the bus told me there’s no such thing as Santa.”
Randi: “They don’t believe? Well, I feel sorry for them.”
Dean: “Mom. I’m not a little kid anymore, you know.”
Randi (fighting back tears): “I know. You’re a big boy.”
Dean: “You can't fool me.  I know the truth about Santa. All these Santas in the mall and on T.V. are fake.  The real Santa’s home making all the toys. Right, Ma?”
Randi: “Cant fool you, Deany.”

I found my Christmas spirit through the eyes of an eight year old. Where'd you find yours?